According to a 1st century BC Roman poet Martial, the preparation of garum involved securing “the blood of a still-gasping mackerel,” which was mixed with salt, and left to ferment for as long as three months. As well as mackerel, prawns, sardines, anchovies, tuna, salmon, red mullet and oysters were used. There is a temptation to think of all this as little more than a mess of rotting fish but the use of the word fermentation should tell us that there is more going on. It was important to use fresh fish. Enzymes in the gut of the fish reacted with the salt, producing an acrid and potent smelling brine. There were different grades of garum with some writers having mackerel as producing the best with tuna second.

The fermentation took two to three months and was carried out on an almost industrial scale. The importance of salt meant concentrated in areas where there were salt pans – Barcelona  was famous for its garum.

The residual liquid was strained off, and carefully bottled and sealed. The result? A condiment similar to the Thai fish sauce you can now buy in most supermarkets and the acrid, foul smelling prawn paste it is sometimes possible to buy from Siam food markets. I once had a block of this I kept in a plastic container in the back of the fridge. It hid there for years, to be taken out occasionally if I was making a curry. Lifting the lid would release the smell, dark, pungent and peaty. Only a small piece was ever required and its taste would sit deep in the background of the dish adding an earthy fecund, grunt to the flavour.

The mackerel was well known to the ancients, and those taken near the Island of Paros were particularly celebrated. The famous fish-sauce called garum, made from their entrails, was invented by the Greeks.

Closer to home we have Worcester Sauce, made from rotten anchovies, producing the same deepening of flavour to a shepherd’s pie or dish of macaroni cheese. 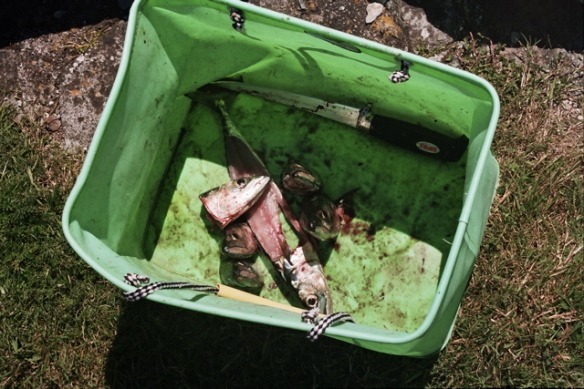