I have a recipe for cormorant. Despite the lack of use it will have in the Cottage I set it out here:-

Having shot your cormorant, hold it well away from you as you carry it home; these birds are exceedingly verminous and the lice are said to be not entirely host-specific. Hang up by the feet with a piece of wire, soak in petrol and set on fire. This treatment both removes most of the feathers and kills the lice. When the smoke has cleared away, take the cormorant down and cut off the beak. Send this to the local Conservancy Board who, if you are in the right area, will give you 3/6d. or sometimes 5/- for it. Bury the carcase, preferably in a light sandy soil, and leave it there for a fortnight. This is said to improve the flavour by removing, in part at least, the taste of rotting fish. Dig up and skin and draw the bird. Place in a strong salt and water solution and soak for forty-eight hours. Remove, dry, stuff with whole unpeeled onions – the onion skins are supposed to bleach the meat to a small extent, so that it is very dark brown instead of being entirely black. Simmer gently in sea-water, to which two tablespoons of chloride of lime have been added, for six hours. This has a further tenderising effect. Take out of the water and allow to dry, meanwhile mixing up a stiff paste of methylated spirit and curry powder. Spread this mixture liberally over the breast of the bird. Finally roast in a very hot oven for three hours. The result is unbelievable. Throw it way. Not even a starving vulture would eat it.

From W.M.W. Fowler’s Countryman’s Cooking. Fowler also has useful things to say about the cooking and eating of crab.  After talking of the tedious business of picking all the meat out of the shell and claws. The proper cookery books will tell you all the weird and wonderful bodge-ups you can make with the result of your labours. Me – I’d send for Lettie! 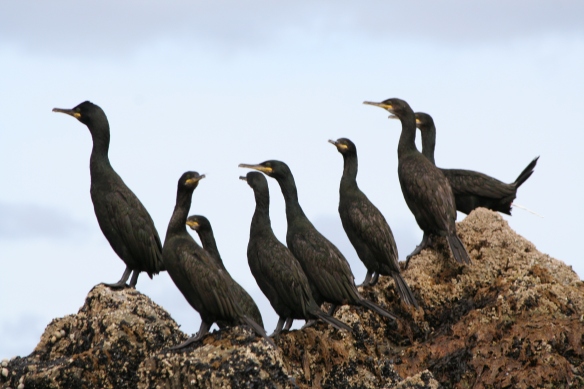 2 thoughts on “Cooking a cormorant”