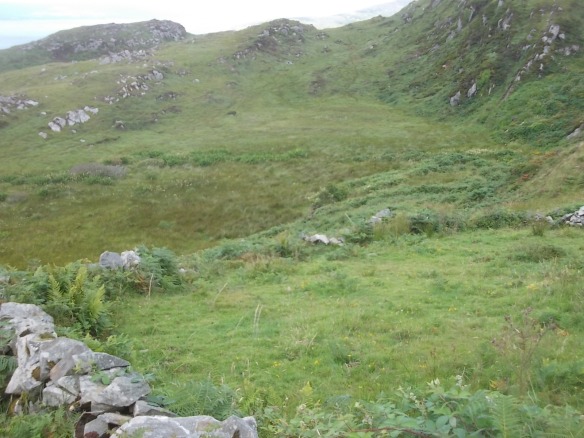 ‘By now it was the Wednesday evening after the festival and the conversation in the pub had moved on from the weekend. The Cow Pat competition had been put to one side for a few weeks and the men in the pub were now troubled by hens.’

‘There had been a batch come into Bantry Market that were being sold by a boy who set the cages up on one of the islands around the roundabout just down from the pedestrian crossing. They had been beautiful birds with a bright blue feather but the eggs laid wrong. A week or so before the men had been congratulating themselves on the birds they had bought. But Tom Cronin had mentioned that his yolks had been pale and watery and they all agreed that there was a problem with the hens as they all had it.’

‘Having alerted them men to the problem Tom Cronin settled that it would be him that would put the boy on the traffic island under some questions that coming Friday to get to the source of the hens and the problems with their yolks.’

‘That issue settled a quiet descended over the men as they waited for some other spark to give them another issue to chew over. They only had to wait the length of time it took Michael O’Hanratty to walk from the field of the Competition to the pub.’

‘Michael O’Hanratty pushed open the door of the pub and walked in. Behind him a weather raged. The rain was coming down in great welts of wet and a wind was whipping at the water in the bay. The quiet in the pub continued as Michael O’Hanratty asked for his pint water dripping off him at the bar. He was going to wait for his moment now.’

‘There were five men sat with Tom Cronin and they included Brendan Daly. Curly Fitzpatrick was stood at the bar and Dennis O’Driscoll and Tom Hayes were sat in the corner still drinking the pints that Michael O’Hanratty had put behind the bar for them.’

‘Michael O’Hanratty drank at his pint and then he turned to face the room.’

‘“I have it now you bastards,” he said and as he spoke it was clear that his ire was not so much with Brendan Daly and his winnings but the men who sat in front of him and his failing to win.

‘He then spilled the story out producing as he went along the empty crisp packet in one hand. He was triumphant as in his other hand he produced the scraps of damp fried potato he had been able to pick away from the grass and announced that these same soggy feckin’ remains had been found in square B4 the very square that the cow had taken its shit in late on Saturday afternoon. ‘

‘Tom Cronin, having taken the initiative with the hens spoke now.

‘“Yer a feckin fool”, he told Michael O’Hanratty. “You’ve spent your time thinking on how to get a cow to a square and to put down its head to eat but there is a good six feet between a cows head and its arse and that’s enough to take its feckin’ backside out of any square that it may chose to chew in.”’

‘“Do the maths now. There’s the one square you say the crips were positioned. That is the square where the cow’s head will be but there’s another eight squares around that one square where its arse could be. The odds are too great. It could not be done.”’

‘Michael O’Hanratty mind fumbled for an answer. The evidence had been conclusive, the empty packet and the pile of crisps it had to point to a nobble. His mouth worked to get out an answer but no sound came out. It was then that Curly Fitzpatrick turned from the bar and in his left hand he was holding a half eaten packet of Cheese and Onion Tayto’s Crisps. Michael O’Hanratty mouth stopped working. He had been undone.’

‘He turned then back to the bar and finished his pint and he left the bar without another word being said. But there was plenty of talk after he had gone and there was a consensus, helped along by the second bottle of Powers’ produed by Brendan Daly that the Cow Pat Competition should be put to one side for a few years.’

‘Michael O’Hanratty went back to his brooding in his car. He knew that he had picked out two thirds of the conspiracy which now included all the men in the pub that night but no matter how many pints he drank he could not get his mind round how a man, even Brendan Daly, could get a cow to orientate itself to lay a pat in a square by way of reference to where its mouth should be.’

The man finished talking. There was still a third of a pint and he drank it down. The sun was still out and it had stopped raining. The air was clear across the bay.

‘O’Hanratty was a fool. If he’d spent less time thinking over pints and spent more time looking the direction of the wind he’d have got it. There are two things to have in mind when a cow deposits it pat; the direction of the wind and if the cow is on a slope. Get those two things right and you’ll have it. A cow likes to have its face to the wind and looking up hill. The competition was late in the afternoon and with the sun shining as it was the wind would be blowing in from the sea. Now knowing that and getting the cow to put its head to eat from a square you’ve shortened the odds as to where its pat should land.’

The man smiled and looked down at his glass. I offered him another and he accepted. As I walked back to the pub a dirty green Mini Metro pulled up and a man got out.