Jerry O’Malley had the floor. ‘Now you see with a hen there are two opposite ends to the story. The start of the story is when you put the hen in the field and it lays its egg and it sits there for a few weeks and then when those few weeks have passed we get to the culmination and the chicken makes its way out of the egg and the story is finished until such time as that chicken is a hen and the story starts all over again.’

‘We are agreed that there is no great excitement in the laying of the egg but think on the drama when that egg starts to hatch and then think on if there should be six eggs in the patch and there is a crowd around to see which one of the eggs starts to crack first. To help spur on the excitement each of those eggs will have a number on it and the men will be there to put their money down on which of those eggs hatches first. Now I have been thinking on this and that in itself would be enough to have the crowd on the edge of the seats.’

‘But there are subtleties that could be introduced from there, niceties, to make it a more inclusive event. I have been thinking hard on this now and I think there is a possibility that with the tension that a man feels whilst waiting for an egg to hatch we have a game that could involve every man, woman and child that walks up the road for the festival.’

‘There’s Ted Kinsella who breeds chickens there in an incubator. He tells me that he has got the art of setting the temperature down so that he can guarantee that all his eggs will have hatched by the end of an afternoon.’

‘We could set that incubator up on the road so there is a good pile of eggs cooked and ready to be delivered for hatching as the people arrive. Then as they walk in each of them for a fee will be given an egg to hold for the day. For those with thick and loose fingers they could be given some bubble wrap to keep the thing safe in.’

The chairman rapped his fingers on the table making enough noise to allow Jerry to draw to a close. The chairman had the end of the meeting in mind and the refreshment there was to be had in the pub.

‘Now Jerry you have put good thought and consideration into how we might keep the masses entertained in three weeks time and I can perceive some of the more positive aspects of what it is you have to suggest. I have no little doubt if there is a child there on the afternoon of the competition who has the good luck to have in its hand the winning egg that hatches and gives rise to a chicken then the look of pure delight and the smiles that will no doubt crack open the little buggers face will make the front page of The Southern Star. But I have my doubts and am concerned that if we apply some more thought to the plan we will see that the odds are stacked up against it and I can foresee that for every picture of delight there will be a whiff of bad publicity.’

The chairman wanted his drink but he also needed to get the point across.

‘There will be a fool who will have an egg in his hand and some friend of his will pass over a pint and needing a free hand to take it the fool will put his hand in his pocket and without thinking will leave the egg there. Now I accept that this could be any man’s pocket and good luck to it but there will be a risk that the next time a hand and its fingers go in there then all they will find will be some pieces of broken shell and the small ball of feathers that’s a newly hatched chicken.’

‘Now as I have suggested there are some pockets that are better than others. I am not to gainsay and it could be that this chicken will grow into a fine old cock that will take the parade in any barnyard but there could be bad tidings that will lurk in some pockets. All it would take is a few heavy fingers, a half opened penknife or a search for some fags and the life of the newly hatched chicken will be snuffed out before the bundle of yellow feathers has even a sniff of fresh air.’

‘And then there will be he crush in the pub. Those men who have not neglected the egg in their pocket will no doubt be keeping it tight in their fist. But if we are there two days into the festival then those same men will be raising their fist into the air to keep their egg safe. Now Jerry have you given any thought as to how a man with an egg in one hand is going to be able to hold two pints. The short answer is that it cannot be done. And Jerry if there is a shortage of men able to hold onto two pints at one time then there will be a holdup, no, I say to you there will be a crush in the pub.’

‘Jerry you know as I do that a pub has a rhythm, a good way of working, that depends as much on the good people behind the bar as it does on the people taking their drink. If on a busy day you incapacitate half the audience by having them hold an egg in their right hand then that smooth flow will be disturbed and there will be a risk of riot if men are left waiting too long for their pints.’

‘And I can see an exacerbation of the problem should any of those men decide to relive the pressure for a moment by leaving an egg on the bar whilst they carry out their two pints. What would happen if the egg was to hatch on the bar. Before you know it the pub on its busiest day would be awash with baby chickens. I can see them now on the bar, squawking for their mother, and getting in the way of the girls doing their best to serve.’

‘No I am sorry Jerry your idea had good legs and could have run a good race but I see the potential for disaster coming up at the last fence.’

‘Ladies and gentlemen we have sat here for two hours debating this matter and now as chairman I will make my suggestion and it is one that I think will hold. When you have heard then I suggest that we can break up for the day and if any of you have a concern with the idea then we take that up in the pub.’

‘I know that it is not an idea that has been free from mishaps in the past but if we manage it carefully and keep Bridget Cronin’s Jack Russell locked up then I would be happy to suggest that we re-run the crab chase and to make the most of the course I think there is the potential for there to be two competitions. The first will be the usual closed chase and the participants can choose their crab with a number on and hope that it comes in ahead of the pack. But the second will be an open chase where the real spice kicks in and the competitors get to catch their own crab, train it up and then it can be entered into the competition.’

The chairman stood up and put his hands on the table.

‘The meeting is closed’ he said. ’Now we can chew over the detail over a pint.’ 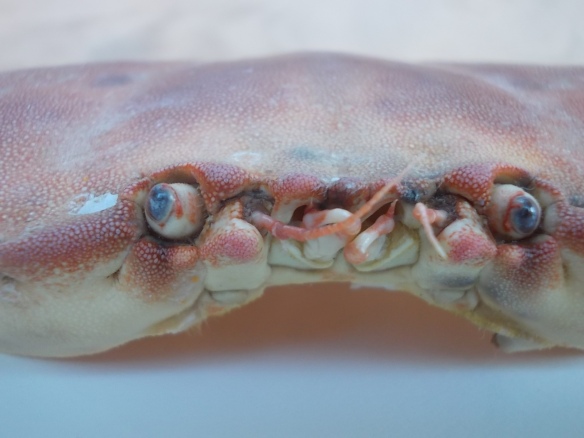