This time last year we were in Spain and I was putting myself back together after an evening drinking too much Patxaran ready to go out shopping in the local town to buy up the ingredients to make a great dish of lamb stewed in honey and roast potatoes. I had tried to tempt the family into the idea of a couple of suckling pigs but the more tender hearted weren’t going for it.

This year tried to tempt the family into a Persian themed Christmas meal but they weren’t having it either I will be slipping down to Birkenhead for a bird to roast and the vegetables to go with it. There are already some sprouts downstairs and bags of two different types of potatoes. I will be picking the bird up from Wards and I might see if they have some oysters as well.

Don’t tell the family but the bird may have a Persian themed stuffing.

Earlier in the week there was some potentially fatal confusion over the buying of cheese in Lunya. I wanted some Vacherin Mont d’Or type cheese, soft to dip into, so I asked if they had any. Peter nodded his head and picked from the shelf a bottle of Patxiran. Now there is an arguement that a man cannot have too much Patxiran in his life but there are at least three bottles of the stuff lurking in the basement and the memory of the last night I had drinking the stuff is still raw. A cigar might have been involved.

We cleared up the confusion and I came away with a small soft cheese made with ewe’s milk. It is in the fridge downstairs nesting up to a Gubben whose used by date might have passed a couple of months ago and has taken over the tang of well rotted grass. I am looking forward to getting stuck into that. 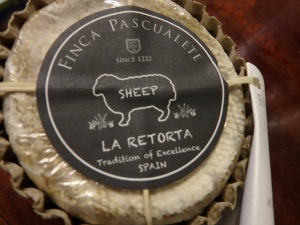 I bought some bottled Navarro beans to go with some sausages.

We had them last night. The sausages had come all the way from Bridgnorth swaddled in newspaper. For the beans I sweated some bacon in a large pan, as it started to give off its fat I added onions, garlic and a few scrapings of chilli. Once the onions were golden I dolloped in a spoonful of thick black treacle. That cooked for a minutes and then beans and tomatoes were stirred in.

They were all very good together. Followed by a bottle of Zot.