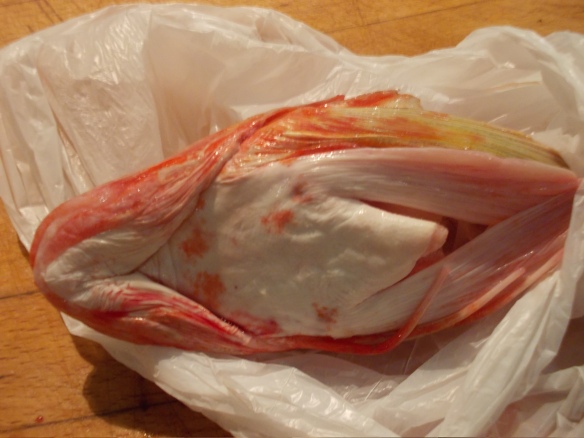 Gurnard is a forgotten fish. You might sometimes see it on a fishmongers slab but it is not a fish that you would go out of your way to buy. But you should. It is one those ugly fish that are full of flavour and make a good stock. I suspect people are put off by its heavy hard head which could almost be a small piece of armour. It is of course that head that gives the flavour to stock.

They were given a brief mention in the stories about mackerel last week having also been downgraded by the Marine Conservation Society. No-one goes out to catch Gurnard. A fisherman might keep them if they are big enough when they come up in the net otherwise they get discarded. Discarding is the fate of a lot of them and because they are not that important no-one really knows how many there are and what damage we are doing to their population.

They are also known as The Sea Robin. They live at the bottom of the sea rooting around for food in the sand 200 yards under the surface. In the water their large pectoral fins open and shut like a bird in flight. By these fins they have three spines which they use to ‘walk’ on the bottom. Although it may look like they are walking the spines stir up the sand and disturb their food.

The name gurnard comes from the sound they make when pulled out of the sea. They have a drumming muscle which beats out a sound a bit like a frog’s croak.

They had some in Wards this morning so I bought three. They were filleted and we will have them this evening deep fried in breadcrumbs with potatoes and peas. I brought the bones back with me to make some stock.

At the counter Nigel, Simon and I talked about mackerel. They had some big ones on the ice. Too big for me but bright still and with their colour unlike the sad wrinkled ones in the supermarket. A customer had been in that week, she had been listening to the news, and would not b buying them again. It was the great factory ships taking them up, hoovering them out of the sea, to be frozen and taken to Spain, where all the good fish go.