At the start of every holiday at the Cottage there is a moment of arrival, the opening few minutes usually late at night, the family, children, asleep in the car, pulled up past the gate and nestling under the low eaves of the kitchen. So low you have to be careful against catching your head on the guttering around the corners. There is a moment whilst the smell, texture and atmosphere of the place is still unfamiliar after months away. The orange glow of the streetlight rises over the garage on the opposite side of the road and getting out of the closed environment of the car, the clean air thickens the lungs; the iodine, clean oyster smell of the sea or, if it has been raining, a damp curtain that needs to be pushed open until the initial surprise gives way and this new different oxygen starts to become familiar. 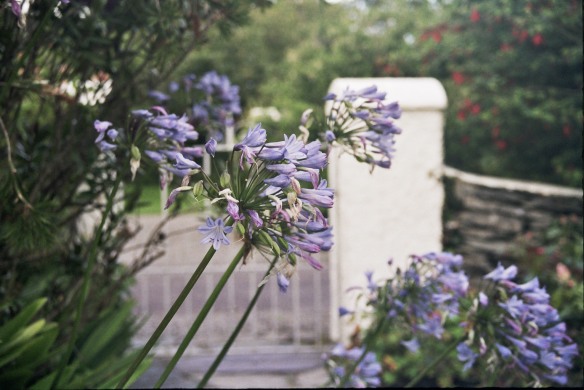 There is the metallic clank of the grey metal gate handle, pushed and catching against the concrete as the gate swings open, like a familiar piece of background noise or a scratch on a record, completely familiar, but heard only behind the surface of the music; seeing how the honeysuckle has grown back from the cutting back of winter, turning from the house over the lawn already wet with the morning dew. Feeling the slight night time chill in the air, the dampness through my thin shoes and walking down the garden to the sea.

Half a mile across Dunmannus Bay the black lumps of the Mizen rise in the night and from beyond that the pale ghostly light from the Fasnet Rock flashes every few minutes, a faint periodic glow and although it is late the gulls on Owen Island are still calling to each other, their noise rising to a crescendo of bad temper and then quietening down until some other disturbance from the dark sets them off again. There is a feeling of exaltation, of release and escape back to a place and time that moves to a different rhythm, something closer to how it should be, something darker and quieter, a sensation of falling back in the cocoon, gathering around the wisps of fancy.

Walking down from the wall onto the smooth stones on the beach and seeing its shape has altered from the previous year. The sky black and scudded with grey clouds lit by the moon, pricked with stars, their light dimmed by the streetlight and the lights of the pier but still bright enough to see the grey wreath of the milky way arching over. Still feeling the heat of the day radiating from the rocks held in. The smell of the sea is thicker here, softer and rubbing against my skin and hair.

Inside the Cottage another family is sleeping, one of my two sisters. They have been there the previous two weeks, shaping the place to their rhythm. We will have a day together tomorrow.

But then I hear noises from the car and have to turn back. Those few stolen moments maybe the best part of being there, that moment of arrival, that shedding of a skin, sloughing of the old world and its tight schedules and constraints and entering that lucky world of the Cottage.

Someone else is getting out of the car now. Walking back across the lawn I look over towards the orange lights along pier; there is a difference in the familiarity of something seen every day and something seen year after year. It is all still there but the differences are noticed more quickly and so the order of boats, the height of the tide, things half forgotten flooding back.

1 thought on “The sound of a metal gate”