I moved office today and after eight years I now have a room with a view.

Up until now every desk I have sat at in the building has been next to a window but the glass has been inward looking into a large glass atrium meaning that the only view was a set of offices exactly like mine but with less paper and mess.

Now I have moved ten yards across the way and the window next to my desk looks out over fresh air. If I look over my shoulder I can a hundred yard stretch of The River Mersey, enough to be able to watch the boats and some ships come in then go out again, up a bit from there I can see the docks of Birkenhead and up from that, on the horizon, the trees of Oxton and St Saviour’s Church. Somewhere to the right of the church and hidden amongst the trees is home.

On a good day I will be able to see the hills of Wales and on a evening as the sun goes down the sky may light up a bright pink like it did last week. All from my desk.

It is just a pity it isn’t a view of Dunmannus Bay!

The weekend was spent in Oxford so Saturday morning we made another trip down Cowley Road.

This time I was determined on buying the ingredients for a meal that evening. There are at least two good Middle-Eastern food shops on the road and I am now a regular visitor so as to make sure there is a good stock of Moghrabieh or Giant Couscous in the house.

The intention was that I buy myself a packet of Ras el Hanout and use this to flavour some chicken. Ras el Hanout is a Middle-Eastern spice that is made up of a blend of different spices such as cumin and fenugreek. Each shop that sells it is supposed to have their own particular blend some of which are better than others. I was expecting to be able to buy a nice neat packet of it.

In the event the Ras el Hanout was difficult to find. I thought it would be there sitting proudly amongst the other clear bags of spices, the dried limes and barberries, the sumac and rose petal leaves, but at first glance it was nowhere to be seen. However after digging around I found some packets tucked in a corner hidden away behind some bags of rice.

Back at the house I worked through how to cook with it.

I should have started by rubbing the Ras el Hanout into some pieces of chicken and allowing it to marinade for an hour or so. But people were hungary and there wasn’t time.

So I started with a mixture of chicken thighs and legs that were fried in hot oil until they started to hiss and spit and stick to the bottom of the pan. As they cooked I seasoned them with salt and pepper and a good dose of the Ras el Hanout.

Once the chicken was browned I removed to a bowl and then cooked some thickly sliced onions, a mixture of thickly sliced red, white and spring onions, with more oil in the pan in which the chicken had been cooking. Once the onions were soft I added some garlic and then stirred the chicken back in together with a cup of water. It was brought up to a simmer and then left to cook through.

When it was done I stirred in some chopped parsley.

We ate it with Moghrabieh, aubergine with onion, carrots cooked with cumin and honey and warmed flat bread.

Sunday we made a trip to Blenheim Palace. This was mostly see the exhibition of art by Ai Weiwei that was spread around the house and grounds. There were about thirty pieces in all some of them so big and imposing thy couldn’t be missed, such as the twenty foot chandelier hung from the ceiling of the great entrance hall, but others were hidden away amongst whatever else was there and could have been easily mistaken for something that had been left behind, such as a plaster helmut, or a set of china plates in a room full of china. There was a leaflet identifying the pieces and you could, if you wanted, tick them off as you walked around.

But perhaps the most arresting sight there as nothing to do with Ai Weiwei but was a bronze statue in the gardens of two men wresting. See what you make of it. 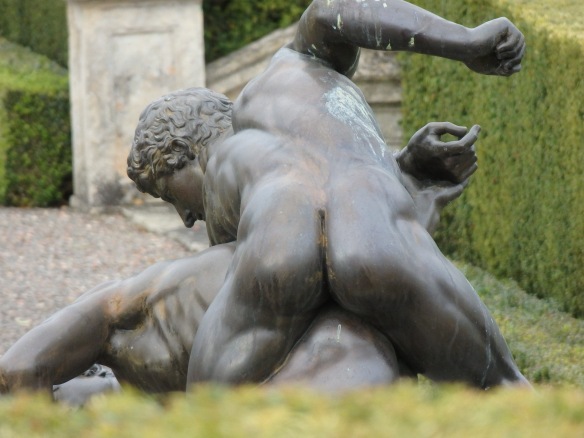 There is no great secret to the identity of our famous neighbour.

Lunchtime today there was a need for fresh air and so I took myself for a walk into Liverpool City Centre which with the wind blowing in off the Mersey can pass for fresh air on a good day. Walking past a bookshop I saw a copy of Graham Norton’s new autobiography and remembered that last week he had been on The One Show with a brief clip of Arundel’s Pub. I thought I would go in and have a flick through to see if he gave it a mention.

There was more than a mention. A whole chapter was given over to Ireland. Loitering  by the shelves in W.H. Smith there wasn’t enough time to read the whole chapter but I was able to give it a skim. There was pride at having a walk named after himself in Bandon and then a lead up on how he came to end up buying a house in Ahakista.

It transpires that he had ambitions on a white washed hidden away small cottage from where there would be a smell of freshly baked bread a grilled mackerel. It sounds as if he may have had his eyes on the Cottage!

There was then mention of the dilapidated state of the house when he bought it and I thought back guiltily to the summer ten years ago when we squeezed past the broken down gate and into the garden and some of us poked their heads through the missing windows to look on the rooms that were thick with damp and the the weather. Before he bought it there were a few years when it looked as if the house would crumble back into the hills and the sea.

There was a picture of a pineapple stuffed with a plastic cup and extruding straws and a low by blow description of last year’s pub quiz.

Before I put the book on the shelf my skimming eye was caught by a comment on not being any happier than arriving and driving down the short drive to the house.

I get that feeling still pulling up in the car on apron of concrete at the top end of the pier having done the drive up from Durrus and seen the wide expanse of Dunmannus Bay and the water clear and flat in the sun.

Should have asked him to the party! Next time perhaps.

It had been warm all day and over lunch the sun had come out over the cottage and we ate outside – although all-around there were clouds – we seemed exempt.

Late in the afternoon moving towards evening – around 7 o’clock – a pale low cloud came over but when you looked up over it there was still a hint of blue sky. There were boats fishing for mackerel off Owen Island on the incoming tide and a shallow golden mist had fallen over the Mizen. Having fallen it seemed to rise again. It was gold as the sun caught it adding other colours and depth so that behind Carberry Island it became impossible to tell what was cloud and what was the faint glimmer of the Mizen head. After a few minutes it cleared so that the Mizen and its mountains rose above the line of mist floating over the water inbetween. I could see them standing in the boats as they came in and that suggested activity in turn suggested that in the twenty or so minutes whilst the light and cloud had played over the bay mackerel had been caught.